Still or sparkling, Saint-Péray’s distinctive white wines take you on a journey.

98 ha of vineyard grow on the gentle slopes leading up to Château de Crussol, a fortress built on a limestone spur, looking out over the Rhône Valley with the same watchful benevolence as the statue of the Virgin Mary. The terroir is diverse, the climate extraordinary, the landscape bold and rugged – all combining to give Saint-Péray’s white wines a unique character. 15% of these wines are sparkling, made with the Traditional Method.

In the 15th century, the villagers of Crussol began to venture outside the walls of the castle, eventually settling in the Mialan Valley to plant their vines. In their dialect, the village of Saint-Pierre-d’Ay became Saint-Péray. Saint-Péray wines were already widely known, but now came to be popular with royalty. After the French revolution, however, the village chose a more religiously neutral name for its wine, and for a time the wines were just known as “Péray white”. One of the appellation winemakers, Louis-Alexandre Faure, seeing the way Champagne was made, was inspired to try the same method himself, and in 1829 he produced the first Saint- Péray sparkling wine. The wines reached their peak of popularity in the 19th century, when 80% of them were enjoyed throughout Europe. They were served at the tables of the great and good, from the Tsars in Russia to Queen Victoria in England. Even Pope Pius VII sang their praises. In the 8th of December 1936 Saint-Péray officially became a Cru, one of the first 9 wines in France to be awarded AOC status.

The 20th century was a time for restoring the vineyards, necessary after the phylloxera crisis of the late 19th century. The winegrowers and cooperative wineries involved in the restructure concentrated on still wines, and gradually the traders began to return, the number of distributors grew and the popularity of Saint-Péray wines began to rise again.

Located on the right bank of the Rhône, 5 km west of Valence in the Ardèche, the appellation vineyards grow in the commune of Saint-Péray and part of the commune of Toulaud.

Rugged slopes and a deep valley create a relatively cool micro-climate within a region with a much warmer, continental climate.

The Saint Péray terroir shows a remarkably rich geodiversity, with changes accrued over four geological eras. In the Primary, granite from the volcanic magma of the Massif Central brought a distinctive touch of silica; in the Secondary, the Alpine Ocean flooded south-eastern France, exposing the Jurassic limestone of the Mountain of Crussol, which gives the terroir its calcium content. In the Tertiary, the hill at Crussol became an island, surrounded by rising seas. The marine deposits laid down at this time form a major part of the appellation’s clay/ limestone soils; and in the glaciations of the Quaternary, fine particles carried in by the winds created layers of loess. And finally, the Rhône added to the diversity of soils by bringing down alluvial deposits from the Alps. 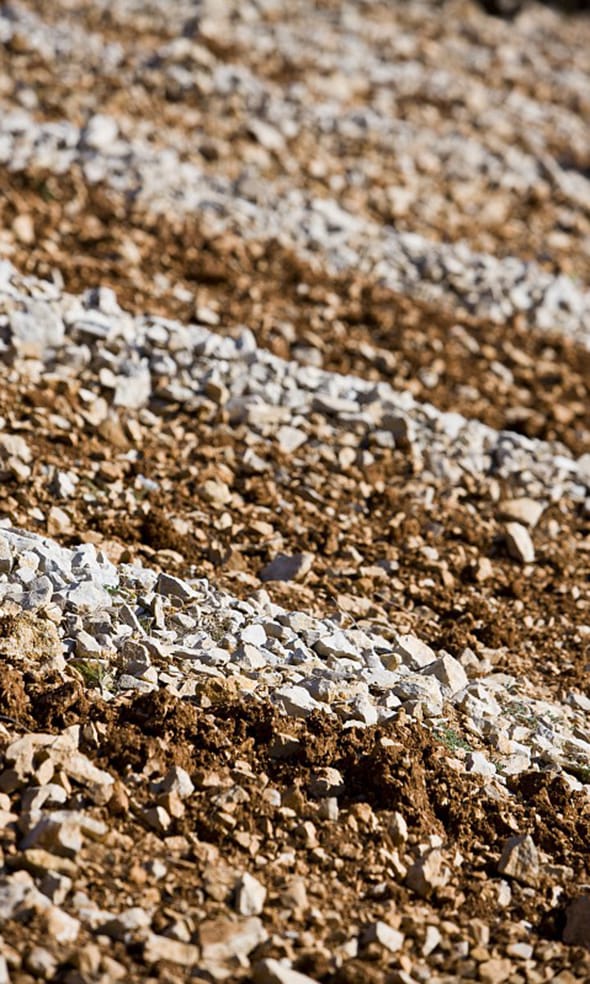