With vines stretching as far as the Roman city from which they take their name, the Costières de Nîmes appellation vineyards provide a graceful transition from Provence to the Camargue, blending garrigue landscapes with views of the wetlands.

The vineyards, with 2,000 years of history, boast a number of outstanding features, including raised terraces of pebbles deposited by the Rhône and Durance rivers, the vigour of the Rhône’s classic grape varietals, sea breezes from the Mediterranean, and the Mistral wind. Costières de Nîmes is mostly geared towards making making red and rose wines, with a much smaller proportion whites. The appellation has made pioneering progress in terms of environmental and landscape protection; 25% of its vines are now grown organically as a result of green initiatives launched over 10 years ago – the Costières de Nîmes Environmental and Landscape Charter being just one of them.

Vines have been grown in Costières de Nîmes since ancient times. In 31 BC, Roman legionaries returning victorious from the Egyptian campaign, settled in Nîmes. The palm and crocodile, emblem of both the town and appellation, symbolise Egypt’s surrender to Rome at the Battle of Actium. In 280, Cassius Severanius, Governor of Narbonne, gave orders to replant the vineyards. In the Middle Ages, the Abbey of Saint Gilles du Gard became the Languedoc Commanderie for Knights Hospitaller of the Order of St John of Jerusalem; this was when viticulture really began to develop. In the 14th century, wines from St Gilles, Nîmes and Costière were among the most popular at the Papal Court in Avignon. In the 17th century, the construction of the Canal du Midi was a boon for winemaking, linking the Rhône to Sète.

In 1955, Philippe Lamour built the Canal du Bas Rhône Languedoc, channelling water from the Rhône southwards towards the Gard, and eastwards towards the Hérault. He became an authority on viticulture in the Gard, advocating improvements in quality. He was appointed President of the Syndicat des Costières du Gard (VDQS since 1950), and subsequently of the body overseeing Vins Délimités de Qualité Supérieur. Costières du Gard was officially recognised by INAO in 1986, and changed its name in 1989 to Costières de Nîmes.

The vineyards span 40km between the lowland plain of the Petit Rhône and the marshlands of the Petite Camargue, bordered to the north by the valley of the Gardon.

The climate is Mediterranean, characterised by a period of semi-drought from June to the end of August. The marine influences of the Mediterranean introduce cooler air. Rainfall is infrequent, and the Mistral wind has a naturally cleansing effect.

The Costières de Nîmes terroir is made up largely of pebbles deposited by the Rhône and Durance rivers in the Quaternary. These are known locally as Grès. They present a layer between 5 and 15 metres deep, with a covering of sand of varying colour, from pale yellow to dark red. The vines send down very deep roots to reach layers of clay which provide a moderate but regular supply of moisture, even during periods of drought. The pebble soils drain freely, quickly shedding any surplus water even after heavy rain. In summer, sea breezes blowing across the hot mass formed by these pebbles increases the differences between daytime and nighttime temperatures, preserving freshness and purity in the grapes. 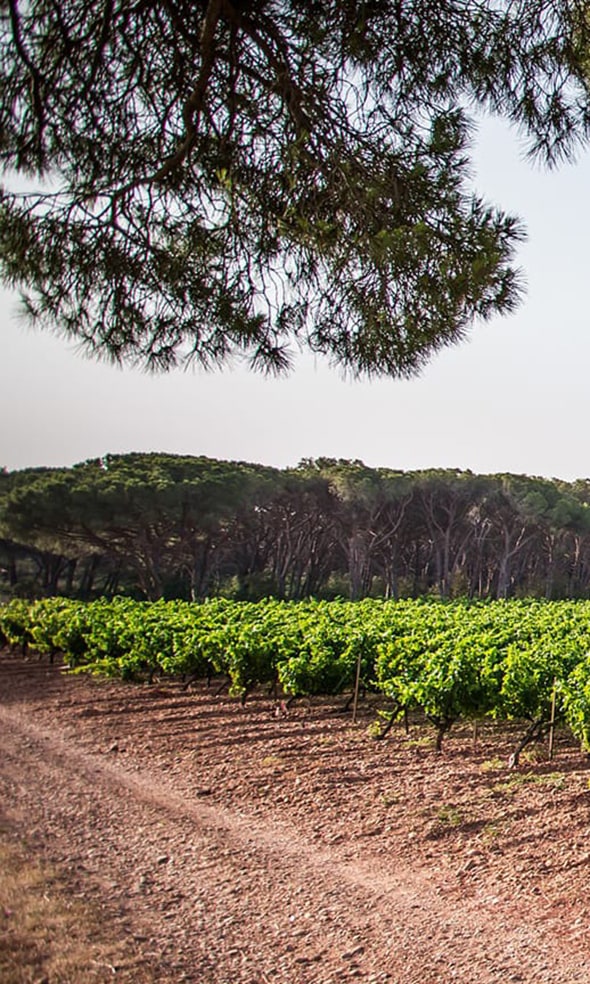